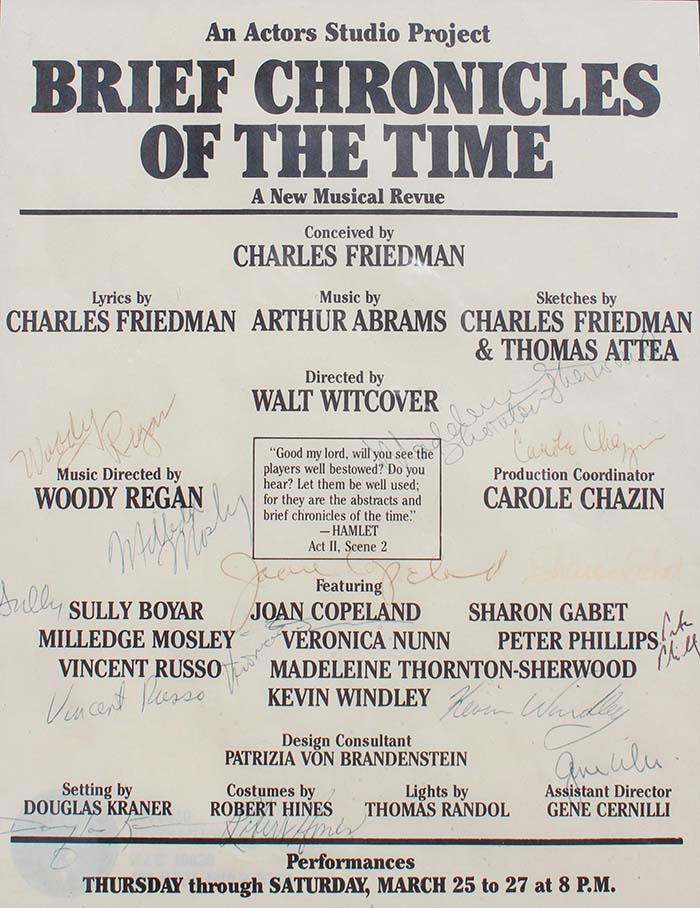 Brief Chronicles of the Time was the first produced show I contributed to and was presented in showcase at The Actors Studio, where I was a member of the Playwrights Unit for ten years. It also marked the period of my collaboration with my theatrical mentor, Charles Friedman, who was the director of such landmark shows as the original production of the revue Pins and Needles, as well as Sing out the New, and the musical version of Street Scene. He went on to direct film musicals at 20th Century Fox under Zanuck, was the original director of The Colgate Comedy Hour, and directed the Sergeant Bilko show for seven years. He was a great theatrical craftsman, who was a show doctor during the 30’s. I learned many valuable things from him, such as all stories are based on an emergency, which gets worse, and the conflict springs from the pressure created by the emergency. In other words, conflict is an effect. It can’t be controlled. But the emergency that precipitates it can. Or, as Charlie used to say, when the curtain goes up, the question is, “Where’s the fire?” He also taught me principles of lyric writing; for instance, that each song has a form that begins with the first word and creates a line of tension that is not released until the last word. I met Charlie when he took the idea of a revue to Lee Strassberg that would be based on how actors represent their times through the roles they take. Lee loved the idea, and Charlie went looking for a comedy writer to work with. He asked the head of the Directors Unit, who told him, “The only funny writer at the Studio is Tom Attea.” We met over lunch, laughed a lot, and began our collaboration. He always wore a fedora and a wristwatch that was given to him by Abbott & Costello. I wish everyone could have such a wonderful apprenticeship as I did with Charlie. At the time, I was a copywriter at Young & Rubicam, writing commercials for Dr Pepper and Jello-O.